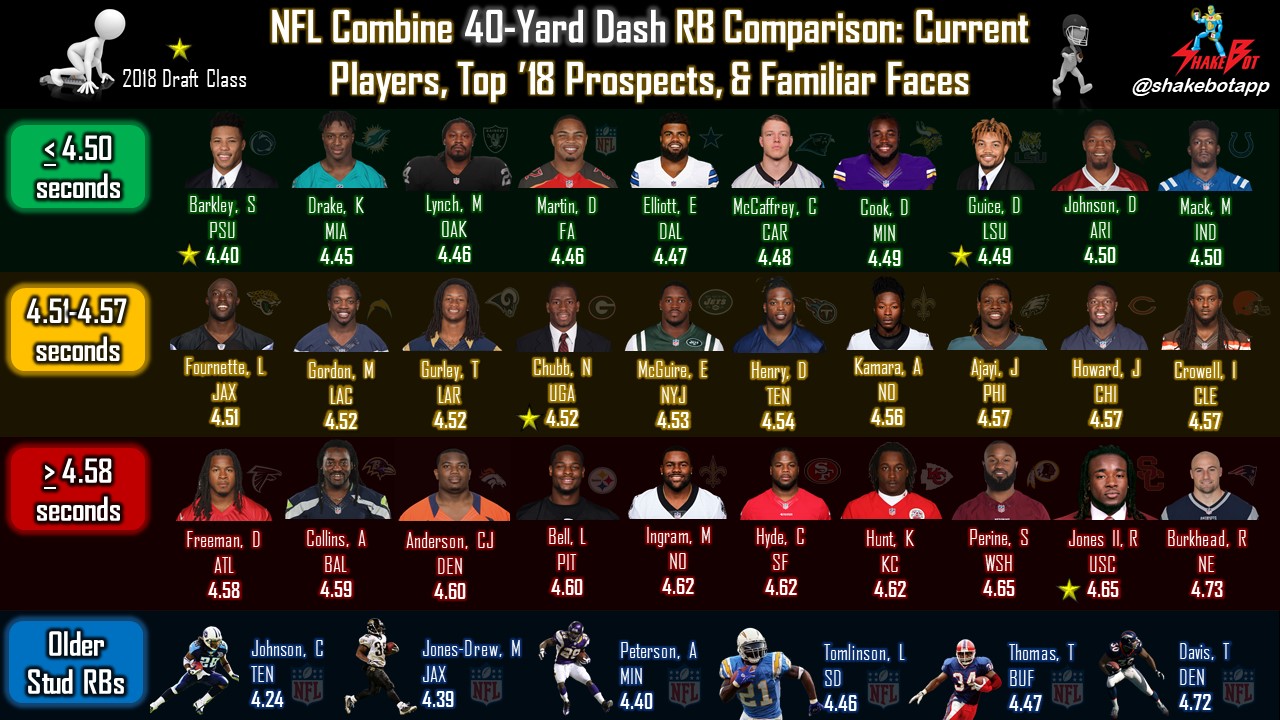 “Like anything else that can be measured in numbers at the combine, the 40 is meaningless. Receivers have to do so much more than run a straight line. They have to be able to read the defenses on the fly, adjust their patterns, check out the quarterback and focus on the ball.” – Andrew Perloff

Andrew Perloff is right. The 40-yard dash is probably the most hyped metric of the NFL combine, despite its widely debated relevance. However, the notion that the 40-yard dash doesn’t matter at all is inaccurate. The notion that it should be heavily contribute to a player’s draft stock is just as faulty.

Using data from the 2016 NFL Combine, accelerations are similar between “slow” and “fast” 40-yard sprinters [1]. Only maximum velocity was correlated with 40-yard dash times [1]. When a running back enters the open field, it’s due to acceleration and/or deceleration techniques to get there. The majority of running backs aren’t fortunate enough to even reach maximal velocity during a relevant play in more than a handful of times in their careers. A breakout 40-yard run with a defender chasing is one of the lone examples of one of these plays.

In-game, maximal-sprint efforts seldom begin in a similar starting position to that of the “40”. During the test, simple things like subtle changes in sprint start position [2-5] or the weight of the athlete’s shoes [6] can impact their results.

Even simple sport-specific alterations like wearing pads impacts the way a player sprints [7].

These details matter, particularly when the difference of hundredths of a second can contribute heavily to a player’s draft stock. The “40” can be a valuable tool for observing  maximal-effort acceleration and sprinting biomechanics, but the final number that’s written down on paper can have questionable significance. In a Division I College Football team, 40-yard sprint performance was negatively correlated with in-game performance [8]. Power metrics that are indicative of acceleration/deceleration abilities (vertical jump, broad jump) were positively correlated with performance [8]. The final time can be used as a general indicator of the player’s ability to achieve and sustain peak velocity over a short time period of time, and acceleration abilities can be determined in context of 10-meter and 20-meter split times. Given the disconnect between testing methods and sport-specific application of the objective measures being gathered, as well as the greater importance of power-related combine tests and NFL film study, the 40-yard dash results shouldn’t weigh heavily into draft decisions.

It’s important to avoid being blinded by the bright spotlight placed upon the “40” at the combine. Sure, the difference between 5.00 and a 4.00 would indicate a significant difference in straight-ahead running speed (and potentially acceleration) capabilities at the time the test was performed. But we need to appreciate that we’re dealing with hundredths of a second of separation from a test that lacks sport-specific application. Notice the variance in the elite running backs in our game today:

If Terrell Davis wasn’t plagued by injury during his career, he could arguably be the best RB of all-time today. And his “40” was 4.72. If it were me, I’m paying more attention to the guys who exhibit greater agility (combined acceleration/deceleration), power, and  decision-making prowess on the field.

It’s interesting and exciting to see how players perform in the 40-yard dash. The relevance of the test is questionable, and although the test itself shouldn’t be dismissed as a valuable NFL Combine metric, the results must be contextualized and interpreted with caution.

Is your training focused in the right direction?

Rating of Perceived Exertion (RPE) vs. Technology for Monitoring Training: Which is Best?

On-Ice Acceleration Technique: How to Get a Leg Up on the Competition